Home » News » BC has most hospitalizations due to mental health issues

The Canadian Institute for Health Information (CIHI) has released its annual report Inpatient Hospitalizations, Surgeries and Childbirth Indicators. According to the report, mental health and addictions conditions, such as mood disorders, schizophrenia and other delusional disorders, were among the most common causes for hospitalization nationally and across all provinces and territories except in Nova Scotia and Manitoba. 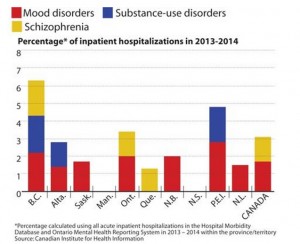 The report suggests that British Columbia admits more people due to mental health issues than any other province in the country. While most of the provinces have a single mental health issue in their top 10 reasons for hospitalization, BC has three: mood disorders, substance use and schizophrenia. BC also has almost double the national average when it comes to overall numbers of mental health-related hospital stays.

One explanation for these numbers is that BC doesn’t have dedicated psychiatric hospitals (like in Ontario, Quebec and Alberta), which aren’t included in the annual report. Across Canada, almost 86 percent of mental health patients are admitted to general hospitals compared to 99 percent in BC.

Jonny Morris, public policy director at the Canadian Mental Health Association (CMHA) BC, told the Vancouver Sun that an important part of the solution is to advocate for more effective treatment outside of hospitals.

“The community is an important place for mental health treatment [and] is enough being invested there to keep people from being admitted to hospital in the first place?” Morris asked in the article.