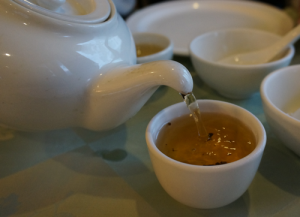 January is Hot Tea Month in Canada! Canadians drink almost 10 million cups of tea each year, and in the midst of the frosty winter weather, the hot beverage is a great way for tea lovers to drink their way to good health. “Not only does tea taste great, but there is a large and growing body of research backing it as a healthy, good-for-you beverage,” says Louise Roberge, President of the Tea Association of Canada.

When it comes to mental health, drinking tea can be an excellent addition to a healthy lifestyle. In particular, the major bioactive compounds in tea, called flavonoids, have been linked with its healthful properties.

Here are four ways that drinking tea can benefit your mental health:

Tea is good for your body and brain.

The link between mental and physical health is well documented and as such the physical benefits of tea can contribute to greater mental wellbeing.

“Tea has been found to help promote weight loss, contribute to cardiovascular health and improve attention and feelings of alertness and arousal,” says Dr. Carol Greenwood, Senior Scientist at the Rotman Research Institute at Baycrest and expert in the relationship between diet and brain health. “This is particularly exciting for brain health as we know that what is good for the heart is good for the brain.”

Tea can create an alert and calm state of mind.

Studies suggest that the amino acid L-theanine found in the tea plant alters the attention networks in the brain and has demonstrable effects on brain waves, leading to a feeling of relaxation without causing drowsiness. In one placebo-controlled study, subjects who drank tea produced more accurate results during an attention task and also felt more alert than subjects who drank a placebo. Green tea, in particular, has been shown to help individuals relax and concentrate more fully on tasks, without the jittery feeling that coffee can bring. Theanine has also been tested in the treatment of schizophrenia with some success in reducing anxiety and other symptoms.

Tea can improve cognition and memory.

The polyphenols in tea can contribute to better cognitive performance and working memory. A recent study with elderly participants has shown that green tea helps slow the age-related decline in brain function seen as declining memory, cognitive impairment and dementia. Further early-stage research on the benefits of tea for preventing Alzheimer’s disease has led to promising results, finding that a component of green tea can disrupt the build-up of plaques in the brain.

Tea has been shown to reduce the effects of a stressful event. Participants in one study reported that symptoms of stress such as stiffness of the shoulders, fatigue of the eyes and headaches decreased after drinking 4 cups of oolong tea every day for a week. Black tea has also been shown to reduce stress hormone levels if consumed regularly.

To learn more about the many health benefits and varieties of tea, visit the Tea Association of Canada website.