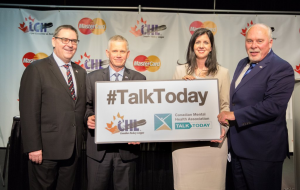 Social media was buzzing over the latest Talk Today announcement. In total, the hashtags #TalkToday and #ParlonsEN reached 4.8 million unique followers on twitter, with 3.8 million overall impressions within 48 hours.

The announcement, made on May 24 at the CHL’s national championship tournament, the Memorial Cup, marks the first step towards linking each of the 60 major junior teams with a local CMHA branch to ensure every player has access to the mental health supports and resources. All 22 teams in the Western Hockey League (WHL) and the 18 teams in the Quebec Major Junior Hockey League (QMJHL) are participating to create a suicide-safe network within their respective leagues and clubs.

This mirrors the partnership between CMHA Ontario the Ontario Hockey League (OHL), which just completed its second season after being established in October 2014.

“Young people can face tremendous stress and pressure and become susceptible to mental health challenges just like everyone else. Talk Today will provide education about mental health and suicide and encourage players and team staff to speak openly about these serious issues,” Quenneville said.

For more information, check out the video of the announcement below.