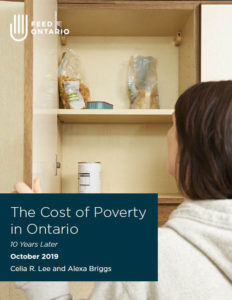 A new report estimates that poverty is costing Ontario as much as $33 billion annually and suggests that a revamped approach to social assistance can help mitigate these costs.

Feed Ontario, the provincial network of food banks, detailed these estimates and outlined a renewed approach to social assistance in The Cost of Poverty in Ontario, which builds upon its first provincial analysis on poverty released in 2008.

Feed Ontario says traditionally governments calculate costs associated with poverty as dollars spent on programs and services, which are often subject to government cuts. In The Cost of Poverty in Ontario, the organization considers the loss of tax revenue and increased health and justice system expenses that are incurred by maintaining people in poverty.

The report notes that poverty rates in Ontario have decreased since Feed Ontario’s first analysis, but income disparity, depth of poverty and the overall associated costs have increased. Further, the report says case studies demonstrate that investment in the well-being of vulnerable people improves quality of life for everyone and contributes to economic and social bottom lines.

Read more about the social determinants of health.