According to the National Trajectory Project, a landmark study published in the March 2015 edition of the Canadian Journal of Psychiatry, less than one-tenth of Canadians found not criminally responsible (NCR) on account of a mental disorder commit a serious violent crime. Moreover, 72 percent of NCR individuals have at least one psychiatric hospitalization before their offence and less than one percent re-commit a serious violent crime once released back into the community. Researchers in the study analyzed 1,800 NCR cases to examine common pathways of people deemed NCR and to address some of the current misconceptions that are held about this population. Some of the most common notions about NCR cases involve serious personal violence, that the verdict is used far too frequently (and conveniently), and that, after a brief period of hospitalization, those found NCR are released back to the community where they promptly reoffend.

This important study helps to dispel many of these notions by offering the first evidence-based picture of the NCR population and contextualizing actual experiences of NCR individuals. Canadian Mental Health Association, Ontario commends this research and, in partnership with the Provincial Human Services and Justice Coordinating Committee has been involved in this issue through submissions to the Minister of Justice and Attorney General of Canada around Bill C-14 the NCR Reform Act.

Richard Kachkar’s story is a telling example. Kachkar is a man who was found NCR for fatally striking Toronto Police Sgt. Ryan Russell with snowplow in 2011. After the incident, the media immediately labeled Kachkar as a “cop killer.” The reality behind the Kachkar story and many others like it, is actually grounded in our fragmented mental health care system. Kachkar and many other NCR individuals sought treatment for their serious mental illness before their crime was committed. So, in some ways, their crimes are a reflection on systemic failures of the mental health system.

Another important reality revealed by the study is that a NCR verdict does not mean the individual gets an “easy ride.” In fact, quite the contrary as many NCR individuals actually spend more time in a mental health hospital than they would have spent in jail if convicted of a crime. Furthermore, when NCR individuals are released back into the community for day visits, they are often subject to intense public scrutiny around community safety.

Yet, the study finds that NCR individuals are less likely to reoffend than those who commit less severe offences and go through the “traditional” correctional system. While recidivism or reoffending was nine percent and 10 percent in Ontario and B.C. respectively, it was twice as high in Quebec at 22 percent. Anne Crocker, the report’s lead in Quebec says there are multiple factors that lead to this result including the fact that Quebec has more NCR individuals with minor charges, which is the population that is more likely to reoffend.

Strangers are also rarely the victims of NCR individuals (23 percent) while the rest are family members (34 percent), other acquaintances (21 percent), and services providers such as police officers and mental health workers (23 percent).

The National Trajectory Project data is broken down into several ‘chapters’ as follows:

For more information and to read the full project results, visit the Canadian Psychiatric Association website. 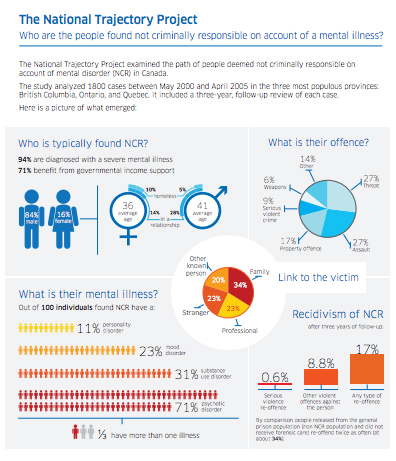 Infographic Created By the Mental Health Commission of Canada (MHCC)