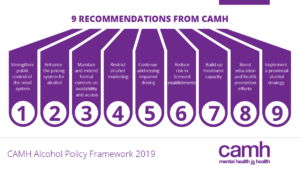 Restricting marketing, mandating risk labels and extending formal controls on availability and access are among the recommendations made in a new Alcohol Policy Framework developed by the Centre for Addiction and Mental Health (CAMH).

Released Monday, this new Alcohol Policy Framework builds upon CAMH’s 2013 version with a comprehensive review of evidence, summary of the current environment and proposed recommendations to guide the development of alcohol policies in Ontario. With the framework, CAMH has sought to create a model that addresses the health and social harms of alcohol use to inform provincial and local initiatives.

Recommendations in the framework include:

Alcohol is the most commonly consumed substance in Canada, with Canadians drinking approximately 50 per cent more than the worldwide average. It presents a significant burden on health outcomes, contributing to approximately 6.6 per cent of deaths in men and 2.2 per cent in women. Between 2015 and 2016, there were over 77,000 hospitalizations entirely attributable to alcohol.

While there are social and economic benefits associated with alcohol, its use is associated with a variety of acute and chronic health harms and plays a causal role in over 200 disease and injury conditions. A recent study found that in 2014, alcohol cost the Canadian economy nearly $15 billion in health care, lost productivity, criminal justice and other direct costs, including more than $5 billion in Ontario alone. The framework notes, “alcohol costs the province of Ontario more than it brings in.”

Recently, the provincial government announced an expansion of alcohol sales to additional grocery stores and an expansion of retailers in underserved communities by 2020. CMHA Ontario submitted concerns earlier this year, calling for an incremental approach to alcohol sale expansion, enhanced prevention and public education on the impacts of alcohol, and advocating for a portion of the additional revenue to be directed to mental health and addictions services.