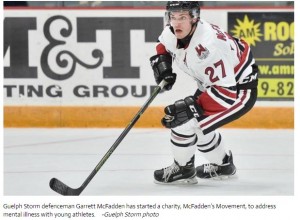 Guelph Storm defenceman Garrett McFadden was in the news after speaking out about the importance of maintaining positive mental health. McFadden’s story appeared in the Guelph Mercury Tribune and the Wellington Advancer in advance of World Suicide Prevention Day, Sept. 10.

McFadden’s interest in mental health has been growing for years. Along with his family and friends, McFadden was shocked when a boy he knew died by suicide five years ago. The event, as well as challenges he’s endured as a hockey player, have shaped his views about suicide awareness and mental health.

He wrote an essay about his experiences, which form the foundation of a mental health initiative, McFadden’s Movement. The essay will be part of a presentation which McFadden hopes to use to connect with minor athletes and minor hockey teams starting this upcoming 2016-17 season.

“Basically I’ll come out and give my talk, tell a little about myself, what I’ve experienced and teach kids about the severity of mental health,” McFadden told the Advancer.

“And then if they want I’ll come out and do a practice with them and hang out and talk to all the kids.”

McFadden, the Storm and the rest of the players in the Ontario Hockey League are taking part in the Talk Today program, one of the most comprehensive mental health program for athletes in Canada. Since the program’s inception in October 2014, 670 players, 158 individual billets and 84 coaches across the OHL have been trained in safeTALK, which teaches individuals the importance of mental health, how to recognize persons with thoughts of suicide and how to take action.

McFadden, 19, enters his third year of the program under the leadership of CMHA Waterloo Wellington.