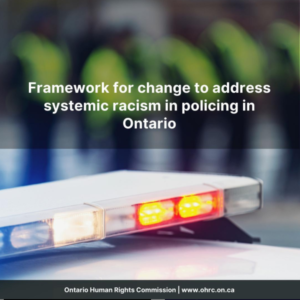 A new report by the Ontario Human Rights Commission (OHRC) calls out a pair of Canadian Mental Health Association (CMHA) branch-based crisis response models as best practices that should be implemented across Ontario.

The OHRC’s framework includes 10 essential steps for eliminating discriminatory practices from policing across the province:

The OHRC points to CMHA Thames Valley Addictions and Mental Health Services’ Mental Health and Addictions Crisis Centre and CMHA Peel Dufferin’s 24.7 Crisis Support Peel Dufferin as examples of the types of health care-led crisis response models that should be implemented across the province. According to the report, “[t]he existing models in London and Peel have successfully diverted significant numbers of calls away from police services and reduced the strain on local hospitals, have provided prompt crisis intervention to people in their time of need, and have created a referral system so the person gets ongoing support in the community.”

CMHA Ontario worked closely with the OHRC as it completed this final report, and supports its call for a provincial framework to address systemic racism and discrimination in policing.

In 2017, the OHRC launched a public inquiry into racial profiling and racial discrimination of Black persons by the Toronto Police Service (TPS).

The OHRC’s first report, A Collective Impact, was released in December 2018 and showed that between 2013 and 2017, Black people were significantly overrepresented in SIU investigations into serious injuries and deaths by TPS members.

A Disparate Impact, the OHRC’s second report released in August 2020, found that Black people were disproportionately charged, arrested, struck, shot or killed by TPS members in comparison to other populations.