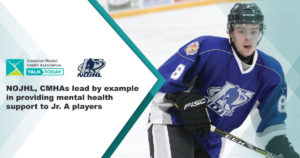 A new partnership launched this week between Jr. A hockey leagues and Canadian Mental Health Associations in the Maritimes, eastern and Northern Ontario, and Manitoba will lead to mental health awareness and suicide prevention training to nearly 1,000 players this season through CMHA’s Talk Today program.

Created in 2014 through a partnership between CMHA Ontario and the Ontario Hockey League, Talk Today is one of the most comprehensive mental health programs for amateur sports in Canada. Now offered by more than 50 CMHAs nationwide, Talk Today has four key elements from which these four leagues will benefit:

Interest in the announcement was widespread, earning significant media coverage and interactions on social media, with close to one million impressions by more than 150,000 users on the Twitter hashtag #TalkToday.

This Talk Today expansion into these leagues is the first phase of a broader partnership between the Canadian Junior Hockey League (CJHL), its member leagues, and local and provincial CMHAs across Canada. The CJHL and CMHAs will work toward supporting the remaining leagues within the Canadian Junior Hockey League with Talk Today over the next two years.