The Mental Health Act sets out the powers and obligations of psychiatric facilities in Ontario. It governs the admission process, the different categories of patient admission, as well as directives around assessment, care and treatment.

The Act also outlines the powers of police officers and Justices of the Peace to make orders for an individual, who meets certain criteria, to undergo psychiatric examination by a physician. Patient rights are also referred to, including procedural details such as rights of appeal to the Consent and Capacity Board.

Part XX.1 Mental Disorder is a section of the Criminal Code which addresses the criminal liability of accused persons affected by a “mental disorder” in the commission of a criminal offence. Among other things, it describes a court’s powers to order assessments and make determinations regarding fitness to stand trial, and rendering a verdict of “not criminally responsible” (NCR). It also prescribes the composition and powers of Review Boards (the ORB in Ontario)

The CDSA is a federal statute for the regulation of certain drugs and substances and their precursors. It contains schedules which categorize the various drugs and narcotics, precursors and derivatives.

The Health Care Consent Act provides, among other things:

The Substitute Decisions Act relates to the Health Care Consent Act, and deals with:

The Health System Improvements Act is an omnibus bill that was enacted in 2007 and makes amendments to a number of other legislation regarding health services and providers, including the Regulated Health Professions Act. Among other things, the Health Systems Improvement Act:

Bill C-14, An Act to amend the Criminal Code and to make related amendments to other Acts (medical assistance in dying)

Bill C-14 was passed into law in June, 2016. Medical assistance in dying is now legal in Canada following the Supreme Court decision in Carter v. Canada in 2015. This law creates an exemption for medical assistance in dying while preserving the Criminal Code prohibition on assisted suicide. The eligibility criteria are specific and narrow in scope, which has been the subject of ongoing debate, particularly in relation to mental health conditions.

This law came into force in 2015 and made important changes to the disclosure of non-conviction information, sometimes pertaining to mental health issues, on police record checks. There is a user-friendly table in the schedule of the Act that defines the three types of police record checks and the corresponding limitations of disclosure for each category.

These regulations were filed in March, 2016 under the Police Services Act to address the police practice of collecting and registering information upon certain interactions with community members. The intent of the regulations is to prevent arbitrary and race-based collection of identifying information by police officers and to protect individual rights in those interactions.

Bill 163, An Act to amend the Workplace Safety and Insurance Act, 1997 and the Ministry of Labor Act with respect to posttraumatic stress disorder

Bill 163 was enacted in 2016 and creates a presumption that posttraumatic stress disorder (PTSD) diagnosed in first responders is related to their work. This will result in quicker access to Workplace Safety and Insurance Board (WSIB) benefits for those who need it, with an aim to improving recovery.

Bill 119 came into law in 2016 and makes amendments to the Personal Health Information Protection Act, 2004 (PHIPA) as well as replacing the Quality of Information Protection Act. Some important changes include: mandatory reporting of privacy breaches, and no limitation period on prosecution of offences under PHIPA. This Act also establishes a framework for the Electronic Health Record and requirements on how organizations shall develop and maintain those records.

A Practical Guide to Mental Health and the Law in Ontario (October 2012) was prepared by Borden Ladner Gervais LLP for the Ontario Hospital Association.

National Standard of Canada for Psychological Health and Safety in the Workplace
This voluntary standard provides employers with a framework on how to foster psychologically safe and healthy work environments.

Federal Framework for Suicide Prevention Act, 2012
An Act which recognizes suicide as a mental health and public health issue in which the Government of Canada is responsible for guidelines, public education and promotion of best practices. 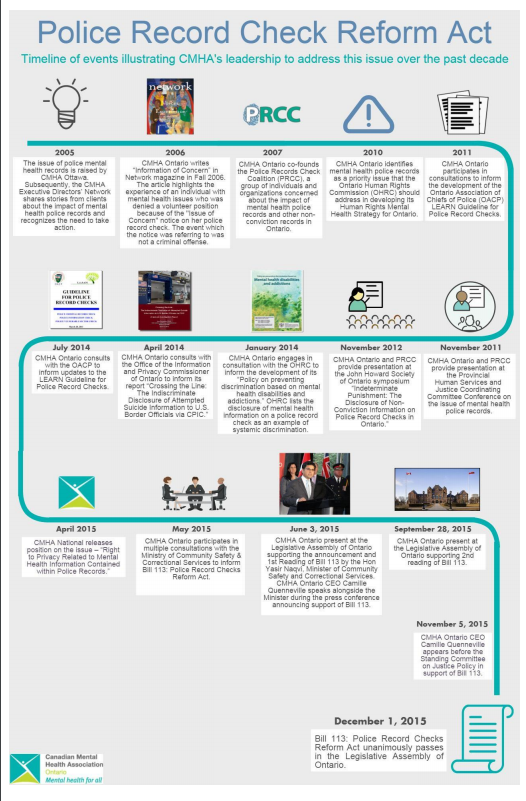